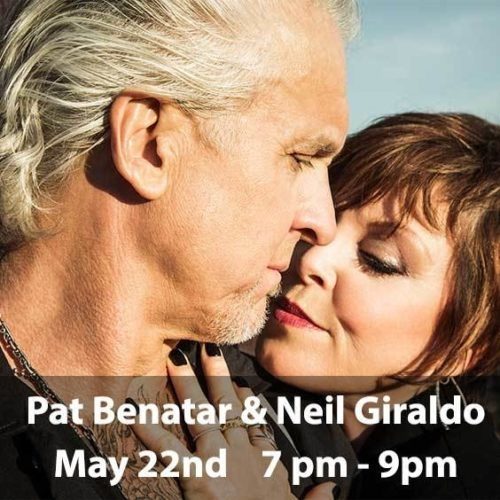 Pat Benatar’s staggering vocals and take-no-prisoners attitude along with Neil Giraldo’s trailblazing artistry as a guitarist, producer and songwriter forged the undeniable chemistry and unique sound that created some of rock’s most memorable hits including “We Belong,” “Invincible,” “Love Is A Battlefield,” “Promises In The Dark,” “We Live For Love,” “Heartbreaker” and “Hell Is For Children.” Together they have created two multi-platinum, five platinum and three gold albums, as well as nineteen Top 40 hits. They have sold over thirty million records worldwide and have won an unprecedented four consecutive GRAMMY® awards. Their rock-and-roll love affair has endured for more than three and a half decades.

John Waite’s catalogue of hits features some of the most loved songs of the 80s and 90s–the #1Worldwide hit ‘Missing You’, The Baby’s ‘Isn't It Time’ and Bad English ‘When I See You Smile’ rank amongst some of his biggest international hits and are still heard on radio today. Others include ‘Tears’, ‘Change’ and ‘These Times Are Hard For Lovers’. ‘Every Step Of The Way’ and ‘If Anybody Had A Heart’ appeared on the soundtrack to the 1986 Demi Moore film About Last Night. ‘Deal for Life’, penned by Martin Page and Bernie Taupin, was featured in the Days Of Thunder soundtrack. As a solo artist and as the lead singer of The Baby’s and Bad English, John Waite was a fixture of album-oriented rock radio stations during the '70s and '80s. John Waite had a talent for power ballads and driving arena rock, occasionally touching on new wave-styled power pop as well.