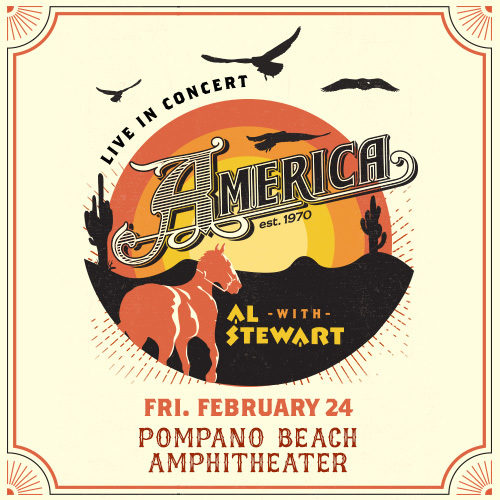 America's journey has found them exploring a wide variety of musical terrain. Their best-known tunes, which also include "I Need You," "Ventura Highway," "Don't Cross The River," "Tin Man," "Lonely People," and "Sister Golden Hair" were cornerstones of 70's Top 40 and FM rock radio. Yet beyond their impressive catalog of hits, listeners would discover there was always much more to America than surface perceptions. The combination of Gerry Beckley's melodic pop rock and Dewey Bunnell's use of folk-jazz elements, slinky Latin-leaning rhythms and impressionistic lyric imagery contrasted well with Dan Peek's more traditional country-rock leanings and highly personal lyrics.

Enjoying massive success early in their career, America earned their stripes as musical soldiers on the battlefield amidst the excess, craziness and chaos of the 70's. Winning a Grammy for Best New Artist and landing a #1 record while barely in your twenties came with its own pitfalls and the exacting pressures of their international stardom affected each member of the group. From anonymous horses to fast-moving trains, America's extraordinary four-decade musical legacy of consummately crafted pop/rock songs, trademark lush harmonies and evocative lyrical landscapes will never go out of style.