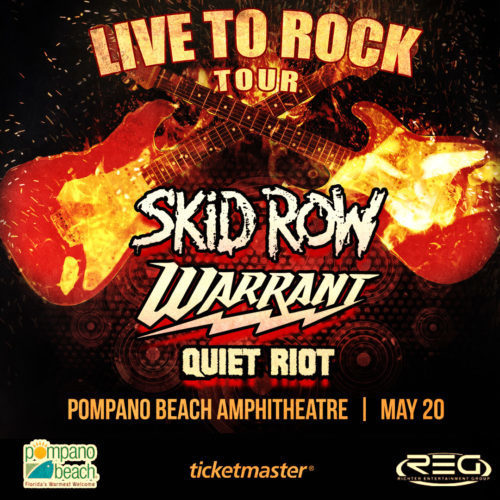 Skid Row with Warrant and Quiet Riot will play Pompano Beach Amphitheatre on May 20, 2022.

Skid Row is an American rock band, formed in 1986 in Toms River, New Jersey. Their current lineup comprises bassist Rachel Bolan, guitarists Dave Sabo and Scotti Hill, drummer Rob Hammersmith and vocalist Erik Grönwall. The group achieved commercial success in the late 1980s and early 1990s, with its first two albums Skid Row (1989) and Slave to the Grind (1991) certified multi-platinum, the latter of which reached #1 on the Billboard 200. Those two albums also produced some of Skid Row's most popular hits, including "18 and Life" and "I Remember You", which peaked in the top 10 of the Billboard Hot 100.

At its core, WARRANT is an American rock band through and through. Hitting it big in 1989, the Hollywood, CA-based band rose through the ranks of the local Sunset Strip scene to the level of multiplatinum selling, chart-topping success selling over 10 million albums worldwide. The band first came into the national spotlight with their debut album Dirty Rotten Filthy Stinking Rich and the massive hit “Heaven,” which reached #1 in Rolling Stone and #2 on the Billboard Hot 100 for two weeks in a row. However, you may be familiar with WARRANT’s 1990 song “Cherry Pie,” which has taken on a pop culture life of its own being featured in countless movies, TV shows, commercials and the largely popular video game, Guitar Hero II.