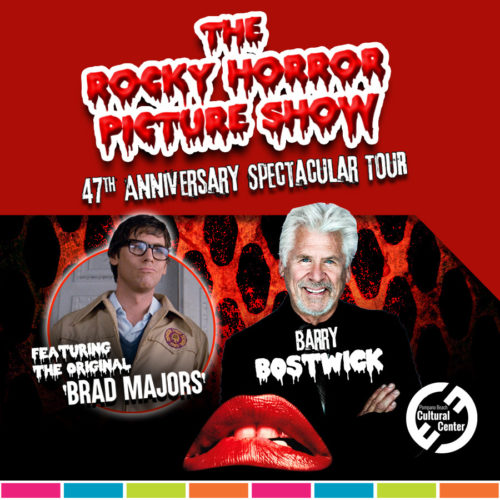 Join actor Barry Bostwick (aka Brad Majors) to do the time warp again during this screening of the original unedited movie featuring the live professional shadow cast “Creatures of the Night” and audience participation. The event will also include a costume contest, a display of memorabilia including photos, documents and wardrobe items from the film.

A Meet & Greet is at 7 pm and the event begins at 8 p.m. Tickets are $50, and V.I.P. Meet & Greet tickets with Barry Bostwick are an additional $100 (includes Rocky Horror VIP laminate, photo taken with Bostwick with your own camera and autograph on your own personal item, or pick out a photo at the event to get signed.)

Prop bags will be sold onsite for $5, no outside props are allowed into the center.

Winning Golden Globe, Tony and Peabody awards for a long and multi-faceted career Barry continues to work in all genres with recently released films The Incredibles 2, Grand Daddy Day Care, Bigger Fatter Liar, among others.

Bostwick is probably best known for playing Brad Majors in the cult classic Rocky Horror Picture Show and Mayor Randall Winston in the long running sitcom "Spin City" and creating the role of Danny Zuko in the original Broadway production of Grease winning his first of three Tony nominations, finally winning the Tony for Best Actor in a Musical for the lead character in The Robber Bridegroom. You can also look for him in the other cult favorite film Megaforce, along with FDR: American Badass, Spyhard, Fantastic Planet, Three From Hell, Undercover Brother 2 and numerous animated features and TV shows.