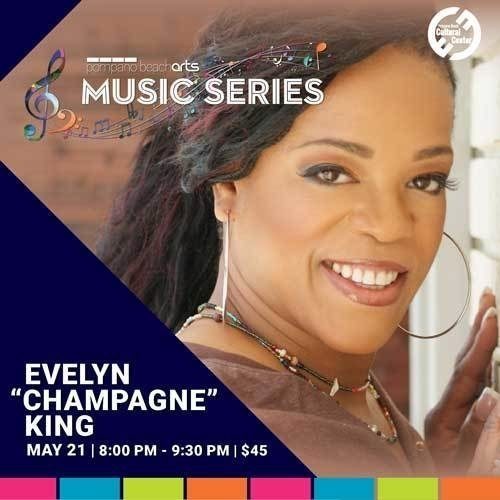 Pompano Beach Cultural Affairs Department is proud to introduce the Pompano Beach Arts Music Series 2022 featuring virtuoso performances by award-winning, globally acclaimed vocal artists and musicians. For three months, starting in April, Pompano Beach Cultural Center will be a wellspring of world-class talent with different styles of popular music represented each month, including jazz, R&B, soul, disco and pop. The stage is set to welcome music lovers of all kinds from near and far for these not-to-be-missed powerhouse concerts! Performances will be on Saturdays from 8pm - 9:30pm. Tickets are $45.

This American singer, songwriter, and record producer is best known for her hit disco single "Shame,” which was released in 1977 during the height of disco's popularity. Evelyn "Champagne" King went on to place fourteen additional singles in the R&B Top 20 list. Some of her other hits include "I'm in Love," "Love Come Down" and "Your Personal Touch.” King is a spirited soul-R&B-disco artist who continues to delight audiences with her funk, musicality and prodigious voice. Join us for a night of hits that will have you dancing in the aisles!

Celebrate African American Music Appreciation Month and relive the glory years of the Detroit sound with an incredible concert by The Motowners. The songs of that era will never lose their appeal, and this group faithfully recreates the smash hits of The Temptations, The Four Tops, Diana Ross & The Supremes, Smokey Robinson, Marvin Gaye, Stevie Wonder and many more.