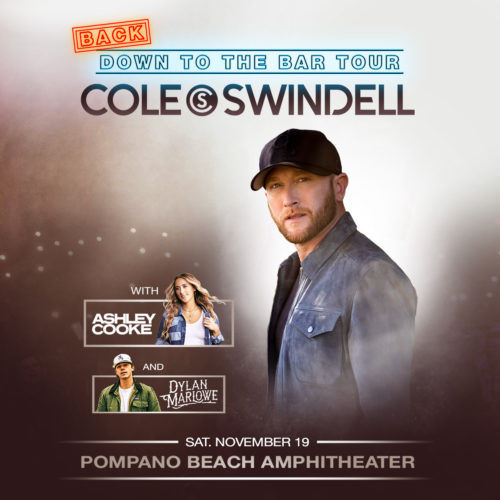 Cole Swindell: Back Down To The Bar

Multi-Platinum selling superstar Cole Swindell recently released his new album Stereotype has already charted two back-to-back multi-week No. 1 hits including “Single Saturday Night,” which has already logged over 250 million global streams, and most recently his smash single “Never Say Never,” a duet with his friend and BBR Music Group’s rising star Lainey Wilson. His new single “She Had Me At Heads Carolina,” has already garnered rave reviews and impacting radio now. In the seven years since his debut on Warner Music Nashville, Swindell has racked up an impressive 11 No. 1 singles as an artist – 12 No. 1’s as a songwriter – nine certified Platinum singles (four singles at 2x Platinum), a Platinum-certified debut album (Cole Swindell) and a Gold-certified sophomore album (You Should Be Here). The Georgia hitmaker has over 5 BILLION global career streams. His massive, GRAMMY-nominated hit “Break Up In The End” was named the NSAI Song of the Year (2019).

Swindell has played on some of the biggest stages in the world, including making history being the first-ever live radio and TV broadcast from the 57th floor terrace of 4 World Trade Center. He has played high-profile national television performances on NBC’s Citi Concert Series on TODAY, ABC’s Good Morning America, The Ellen Degeneres Show, Tonight Show starring Jimmy Fallon, Jimmy Kimmel Live!, ABC’s CMA Fest specials, CMA and ACM Awards, MLB Network, NASCAR and Sports Illustrated among others. The entertainer has toured with some of the biggest names in country music, including Luke Bryan, Kenny Chesney, Jason Aldean, Thomas Rhett, Florida Georgia Line and Dierks Bentley.

Raised between the coasts of California and Florida, Ashley Cooke is an up-and-coming country artist who is bringing authentic and honest storytelling to her music. The singer/songwriter developed her love of country music as Rascal Flatts, Jason Aldean and Florida Georgia Line quickly became the soundtrack of high school. Cooke followed her passion for music to Belmont University where she won the Country Showcase, placing her in an elite class of winners that includes Brad Paisley, Chris Young, Tyler Hubbard of Florida Georgia Line and more.

Last year, Cooke hit the road on tour with fellow rising acts BRELAND and Spencer Crandall and spent the first half of 2022 touring alongside Cole Swindell, Brett Young and Jordan Davis. Cooke will continue to appear at some of the summer’s hottest fairs and festivals as she gears up to release more new music via Big Loud Records / Back Blocks Music.

Statesboro, Georgia is bursting with pride since native son Dylan Marlowe has become the newest rising star in Nashville’s country music scene. Some of country music’s leading media outlets have already taken notice of the rising new artist. Country Now profiled Marlowe as one of their ‘brightest new stars’ picks for their “Country Next” series. The Boot exclusively premiered his most recent song “Goodbye Gets Around” and Taste of Country premiered the video for “Goodbye Gets Around.”