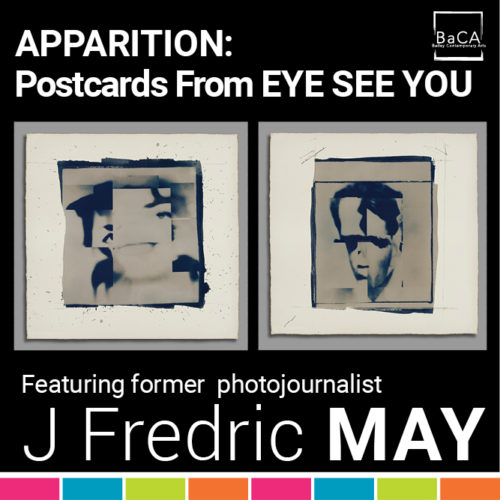 This provocative collection of images showcases the extraordinary scope of artist and photographer J. Fredric May, who is legally blind and subject to vivid visual hallucinations, which allows him to explore the familiar through a unique and haunting prism. Turning a tragic event into the inspiration for an experimental new artform, this artist invites viewers to see the world through his eyes. After suffering a stroke during heart surgery, his award-winning career as a photojournalist and commercial photographer was over, but his ability to create advanced to another realm.

J Fredric May, a former photojournalist and commercial photographer, made a living travelling the world and creating visual work characterized by a preference for bold colors and confrontational compositions. During this time, he was also a filmmaker, directing more than 50 corporate and industrial films, that cumulatively raised more than 7 million dollars for non-profit organizations.

Then, in 2012, during open heart surgery, May suffered a stroke that left him legally blind. Suddenly, he found himself subject to vivid visual hallucinations, which altered his optic relationship to his surroundings. As a visual artist, his practice was also transformed, resulting in the photographic style demonstrated in his current project, Apparition: Postcards from Eye See You.

Where others might have been discouraged or quit photography altogether, May embraced his unfamiliar perspective: “With profound curiosity and a life-long habit of experimentation, I picked up my iPad and started to explore. Because I was raised by inventors and engineers, I embraced regeneration as a way of life, so I focused my limited attention on what could be invented and created.”

To produce this series, May used imaging software to corrupt visual data. He explains, “I was effectively able to replicate what was happening in my own brain. I scanned found portraits, maimed their component features and rebuilt them as layered composites to resemble how I now see, in fragments, somehow familiar, yet strange. I take my layered composites and print them as cyanotypes, and then bleach and tone them with a mixture of photo chemicals and tea.”

In the very last step, May digitizes the cyanotypes and alters them further as he sees fit. The final images are like soft, hazy, mosaicked memories combined with intricate, focused fragments. The result is a testament to how the photographic process, as a medium, transcends static, repetitive, or mechanical use, and with each frame offers the real possibility to create something truly new.

J Fredric May will be hosting an additional Artist Talk on November 2nd at Bailey Contemporary Arts.